In the brilliant autumn foliage on the southern flank of Colorado’s White River Plateau rising above the city of Glenwood Springs, I stood in wonder.

Below me, among the brilliant aspen leaves, was a low cement structure several feet across, clearly of some antiquity. This was the Transfer Spring, a limestone karst spring that flows regularly each year, providing water that helps replenish the surrounding grove of trees. This water eventually flows to the south, draining into the gully that becomes Cascade Creek, descending to a junction with the Colorado River in western Glenwood Canyon.

In this year of drought, however, the spring was bone dry. No water emerged from the basin. It was mid-October 2020, and in that year of global pandemic and disruption, the natural environment at Glenwood Springs was stressed by the lack of moisture. Earlier that year, a terrible fire had ravaged the terrain to the east, burning many square miles along the southern White River Plateau.

Being a karst spring emerging from the Leadville Limestone strata that dipped to the south, the Transfer Spring is one of many along the Plateau. Snow melt and summer rains on the higher terrain to the north of the Transfer Spring disappears underground through fissures and shallow, small pockets in the limestone, emerging where the natural underground flow is interrupted by faulting.

Most years, the Transfer Spring flows continuously. For more than a century, visitors to the plateau ascending the Transfer Trail from Glenwood Springs would use the spring and associated stock tank for watering horses, sheep, and cattle. Located on the main road, the White River National Forest even erected a ranger station with telephone service that served forest visitors until the early 1940s.

When the Transfer Trail was re-routed to the west, the ranger station was dismantled and removed, leaving the Transfer Spring silent and forgotten along an abandoned portion of the road.

Features like this mostly-forgotten spring illustrate the value of protecting karst lands in Colorado. A substantial portion of the plateau is comprised of soluble rock, with water traveling underground and emerging from springs, such as that which feeds the famous Hanging Lake in Dead Horse Canyon, east of the Transfer Spring.

Geologists and hydrologists still don’t fully understand the karst process at this spring, but it is suspected the water drains into large, grass-bottomed solutional sinks along the eastern rim of Grizzly Creek to the north of Hanging Lake.

Theoretically, these large sinks were created during the Ice Age, when a large valley glacier flowed down Grizzly Creek from the central plateau and overrode the eastern rim at the big bend of the creek. Large quantities of ice flowing onto the Leadville Limestone strata along the Grizzly rim for centuries clearly provided substantial snowmelt to the region. This water likely flowed down Dead Horse Creek, but also a portion of it disappeared into the strata.

The devastating Grizzly Creek Fire in the summer of 2020 spared Hanging Lake itself, but ravaged terrain on all sides, including to the north and northwest, along the Grizzly rim. The large sinks that potentially feed the spring feeding the lake also acted as fire breaks, limiting the growth of the fire north toward the Coffee Pot Road and Broken Rib Spring.

With studies by hydrogeologist Tom Aley and the Ozark Underground Lab currently under way to confirm the underground relationship between these regions and the large karst spring in Dead Horse Creek, cavers already understand the importance of this karst region and how actions near Coffee Pot Road can adversely affect regions miles away.

Although Transfer Spring emerges north of the proposed expansion of the Mid-Continent Quarry, the underground drainage demonstrates how similar hidden water flow at the quarry site itself can be affected if the strata is removed.

Water flowing through this soluble limestone strata drains south, dropping to great depths when it reaches the West Glenwood Fault, a major fault zone located west and northwest of Glenwood Caverns Adventure Park. This fault acts as a collector, capturing water flow descending from elevation on the plateau flank, and funneling it down to the groundwater below the city.

This water in turn helps feed the famous hot springs in the community that have flowed for millennia. While water descends deep underground into this vast reservoir from all compass directions, removing even a portion of the network can have unforeseen results.

As an example, the Grizzly Creek Fire of 2020 severely scorched the terrain along Blue Gulch, a small tributary to the Colorado River east of Grizzly Creek and west of Hanging Lake and Dead Horse Creek. In this little-visited region, the removal of most of the ground cover resulted in exceptional flooding along Glenwood Canyon in July and August 2021, when heavy thunderstorms stalled over the region and dumped large amounts of precipitation. Without the ground cover to soak up and delay the runoff, the water simply flowed south off the plateau, raced down the gulch, mobilized massive amounts of debris, and heavily damaged Interstate Highway 70.

If Rocky Mountain Industrials is successful in its permitting of the Mid-Continent Quarry just north of Glenwood Springs, the potential exists for similar flooding episodes, given meteorological circumstances during the summer monsoon season.

Currently, heavy rain on that portion of the plateau near the Transfer Spring is mostly absorbed by the vegetation. Other water soaks into the limestone strata, where it slowly flows down the dip of the rock to the south, following cracks, fissures and even cave passages, eventually draining into the West Glenwood Fault.

Consider a potential future in which Rocky Mountain Industrials has been given federal approval for its quarry expansion over the objections of the City of Glenwood Springs and residents.

With a large region of vegetation removed, and the underlying limestone quarried away, heavy rainfall has no other course than to run off the exposed quartzite strata below the limestone and race down the unnamed gulch along the West Glenwood Fault. This leads directly to businesses and homes below, along with the Interstate 70 highway, all of which could see substantial damage from uncontrolled flooding.

Karst plays a critical role in our everyday lives. Protecting it is important.

At Glenwood Springs, karst is critical to the well-being of the community. To endanger karst and the flow of water is taking unnecessary and potentially tragic chances with natural processes.

This article was first published Feb. 8, 2022, on RockyMountainCaving.com

Richard Rhinehart serves as the digital editor for Colorado’s Rocky Mountain Caving journal. The founding editor for the journal until 2015, he is a member of the National Speleological Society.

Recognized as a Fellow of the Society, he received the Peter M. Hauer Spelean History Award in 2011 for his research regarding the history of Colorado’s many caves. 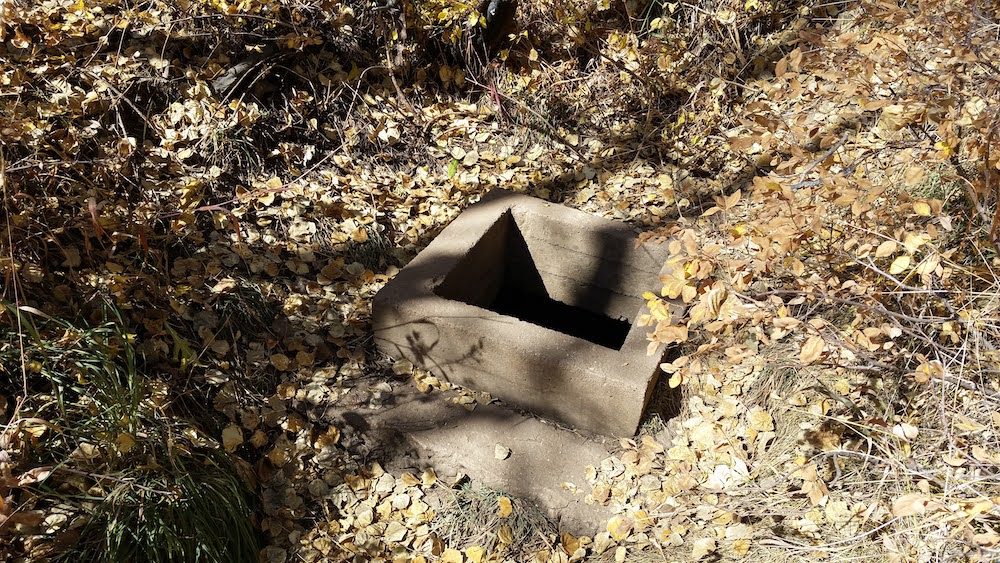 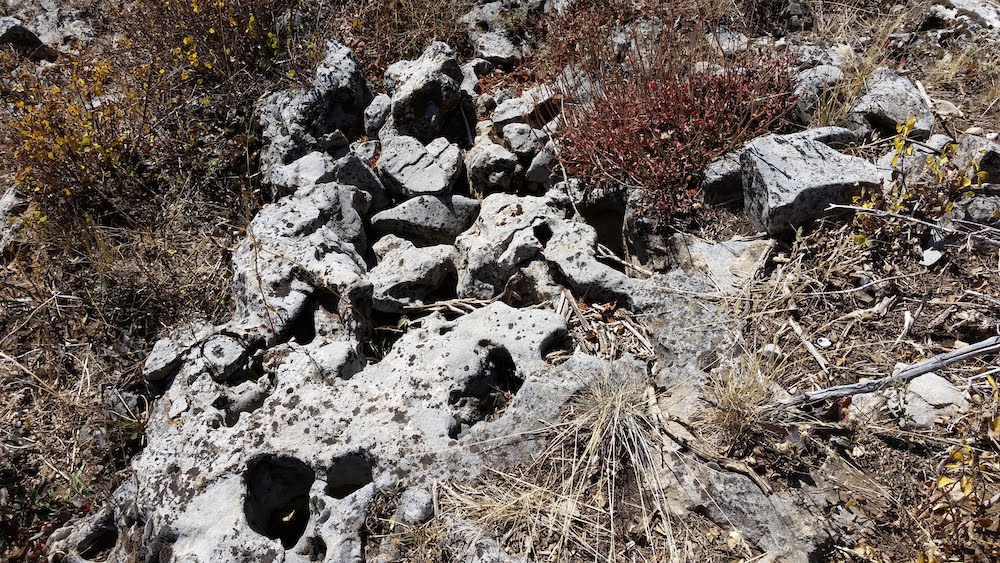 A karst limestone outcropping on the edge of the White River Plateau.

"At Glenwood Springs, karst is critical to the well-being of the community. To endanger karst and the flow of water is taking unnecessary and potentially tragic chances with natural processes." 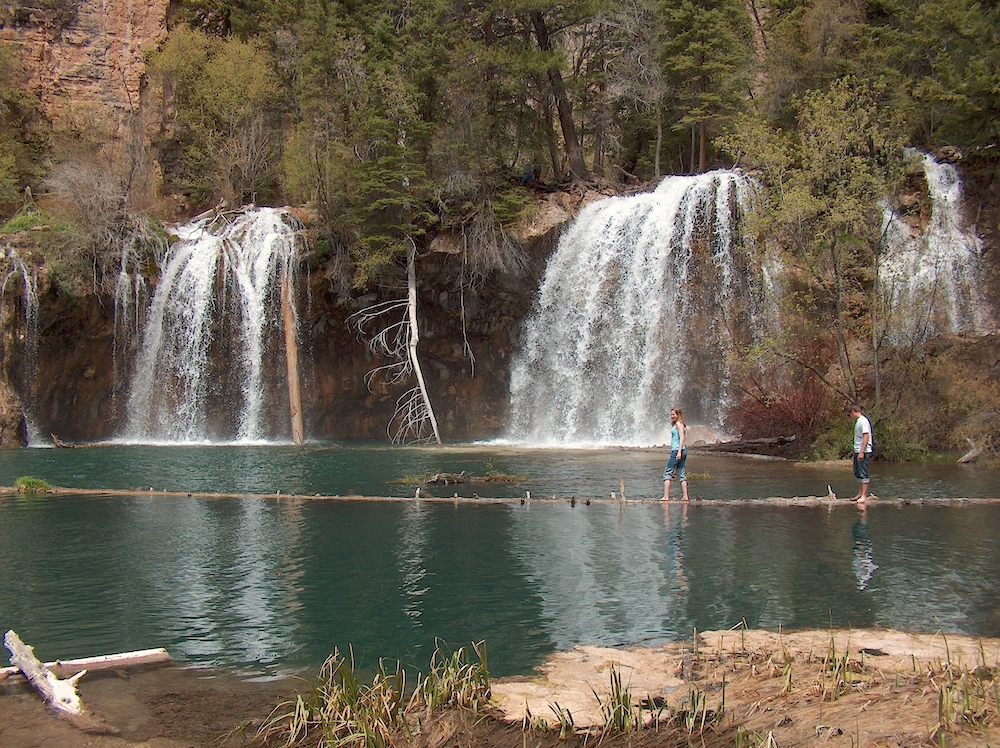 The famous Hanging Lake is east of the Transfer Spring. The lake is fed by water that sinks into soluble rock and the groundwater network of the Flat Tops, and flows back to the surface above the lake at Spouting Rock.