Permission from the U.S. Bureau of Land Management (BLM) for cavers to explore the Witches’ Pantry cave network is on hold until the agency can study bones scattered in the cave entrance.

In a Zoom meeting of the Colorado Cave Survey (CCS) on Jan. 20, 2022, BLM recreation specialist Justin Jones told CCS members that the agency is allowing people to visit the entrance to the Witches’ Pantry cave.

However, Jones told the group that BLM will not allow any digging in the cave until it can conduct a full paleontological study of the bones in the cave entrance, reported Richard Rhinehart, Mid-Continent Quarry Committee Head for Colorado Cave Survey.

Larry Sandoval, field manager for BLM’s Colorado River Valley Field Office in Silt, said BLM has no plans to carry out that study in 2022.

While BLM is not barring visitors to the entry chamber, the location of Witches’ Pantry is a closely held secret in order to protect the cave from vandalism. It is within the proposed limestone mine expansion area.

Rhinehart, of Fort Collins, and Rob McFarland of Rifle discovered the cave in 2019. Learn more about the cave discovery here.

While BLM considers Witches’ Pantry to be a “significant” cave, officials have told McFarland that the 1872 Mining Law holds priority over the federal Cave Resources Protection Act of 1988. Whether a newly discovered cave can be protected from destruction by a proposed mining project is a situation that has yet to be tested, Rhinehart said.

The BLM did allow a small team of cavers, including McFarland, to survey the lower level of the cave during the summer of 2021. That level had been sketched in 2019, but not surveyed.

Rhinehart said it is possible in the cave’s current state for short, slim cavers – mostly women — to squeeze beyond the entrance chamber into a lower level, where a “blowing lead” indicates more passages and chambers. The survey team used a compass for direction, a clinometer to measure the angle of the passage, and a tape to measure the length of the shot. A book person recorded numbers from the survey and sketched the passages for later use in drafting a map.

The Colorado Cave Survey is part of the National Speleological Society. The Survey has been a volunteer partner with the White River National Forest since 1969 and with the BLM in Colorado since about 1986, Rhinehart said.

Also at the Colorado Cave Survey’s Jan. 20 meeting, members elected McFarland to serve as the organization’s statewide chair for 2022. 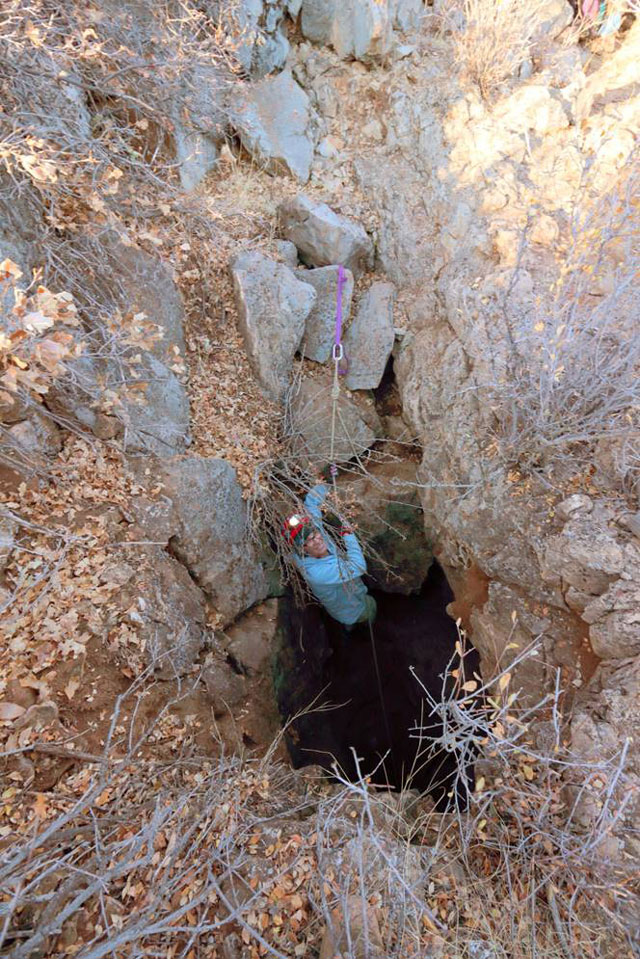 Kathy DuChene, a member of the Colorado Cave Survey, begins a descent into Witches’ Pantry Cave in 2019. Photo by Norm Thompson.