U.S. Bureau of Land Management decision-makers are “in a holding pattern” as they wait for the results of a study of the 320-acre limestone deposit that Rocky Mountain Industrials seeks to mine.

“We are hoping to have a draft DCV ready by mid-2022,” said Larry Sandoval, field manager for BLM’s Colorado River Valley Field Office in Silt, in a telephone interview on Jan. 25.

The DCV, which stands for “Determination of Common Variety,” is the end result of a detailed study of the limestone deposit. It will indicate whether the limestone meets 1872 Mining Law standards as a “locatable” mineral, or is of a common variety and thus considered a “saleable” mineral.

If the DCV yields a very high percentage of locatable limestone, Sandoval said, then RMI’s 2019 proposal would be considered acceptable. BLM would then move forward with a series of five studies prior to launching a formal environmental impact statement process.

“But if it comes back at 50-50, for example, I’d have to make a decision,” Sandoval said. “We may need to step back, and RMI would have to bring in a new application,” he said, that reflects the actual nature of the limestone deposit.

The DCV study is being conducted by a team of field-level mineral experts in BLM offices around the West. BLM officials initially expected it to be released in 2021. It’s delayed, Sandoval said, because a review team in BLM’s headquarters office asked for more details.

The field-level team is doing that now, he said, and expected to send a new draft report back to the national-level review team in the coming months.

The team has already done extensive work with geologic mapping, collecting limestone samples from the surface, and looking at the core drilling samples taken over the years by previous mining operations. The DCV also analyzes the potential profitability of the proposed mining operation.

“The takeaway here is that we continue to be in a holding pattern until the DCV is completed,” Sandoval said. 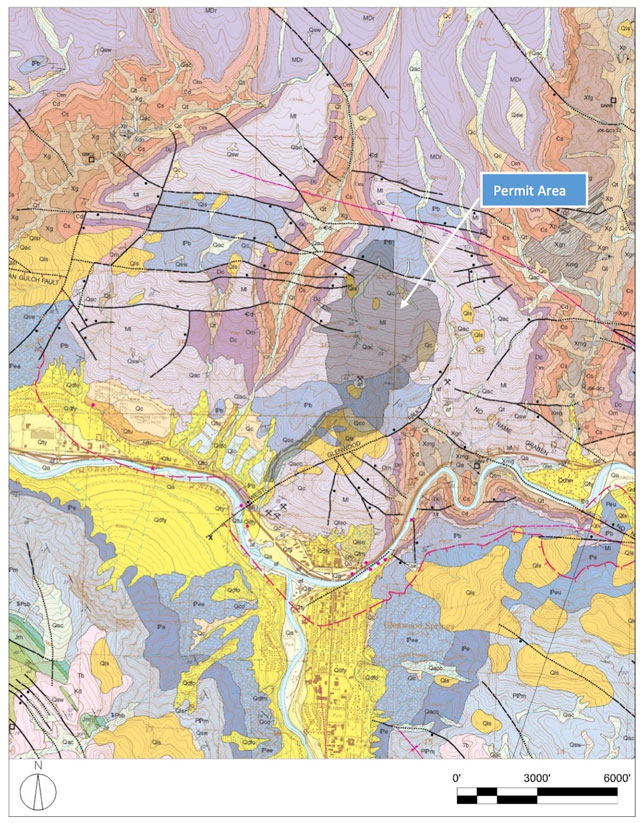 The geologic map for the Glenwood Springs area, including the current limestone quarry and proposed expansion area. Limestone deposits appear in light purple. Base map prepared by the U.S. Geological Survey.