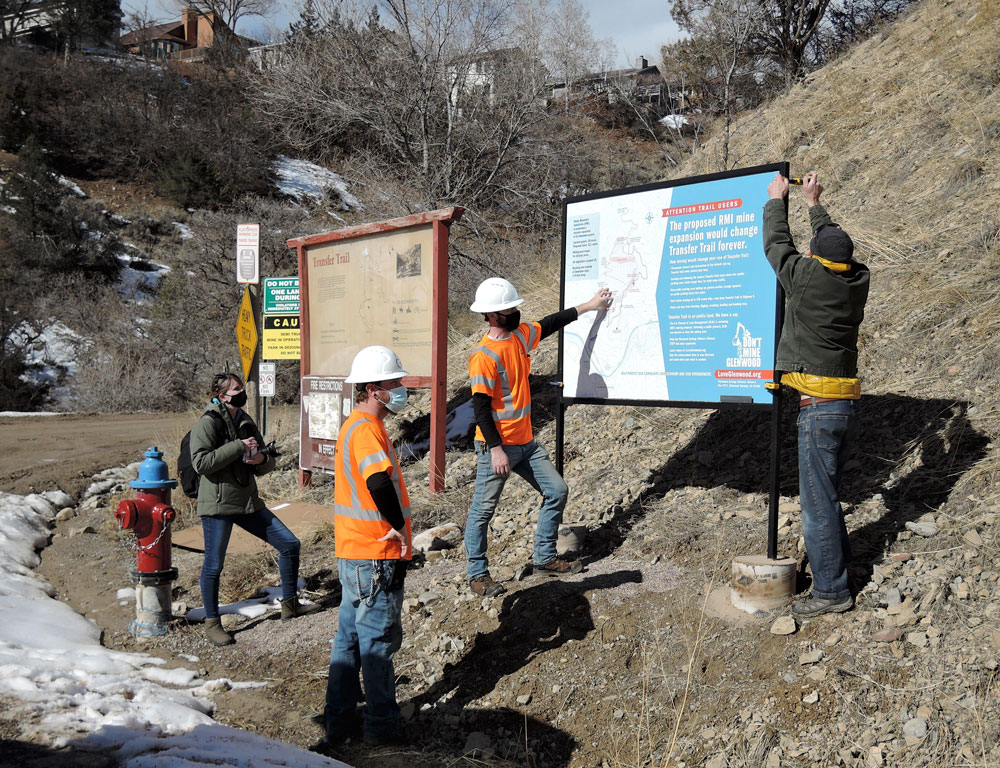 A City of Glenwood Springs maintenance crew installed signs at the lower Transfer Trail parking lot on Feb. 2, 2021, alerting Transfer Trail users to changes they would face if mining were expanded on the mountain.

The Glenwood Springs Citizens’ Alliance, a community organization with more than 2,800 supporters, designed and produced the signs. They are part of GSCA’s ongoing effort to inform people about the threats posed by the proposed expansion of the Transfer Trail limestone mine.

“The proposed expansion of the mine would permanently change Transfer Trail as we know it,” said Jeff Peterson, president of the Citizens’ Alliance. “Backcountry travelers who use and love Transfer Trail need to know what’s being proposed.”

A large informational sign, erected in the lower Transfer parking lot, lists the changes to Transfer Trail. A detailed topographic map illustrates the changes, and the sign invites trail users to get involved in stopping the mine expansion.

A second small reminder sign, at right, is posted along the Transfer Trail roadway.

Transfer Trail usage and parking changes are part of the mine expansion proposal submitted by mine developer Rocky Mountain Industrials in its permit request to the U.S. Bureau of Land Management.

“Our community is already aligned in opposition to the proposed mine expansion for key reasons, such as 20 years of noise, dust and truck traffic and a permanent scar on the mountain,” said Glenwood Springs Mayor Jonathan Godes.

“Transfer Trail itself is at risk too. We need trail users to help protect our historic Transfer Trail, and the adventurous access it provides to the Flat Tops,” Godes added.

In its mine expansion proposal accepted by BLM in 2019, Rocky Mountain Industrials described three major changes to Transfer Trail.

In addition to the proposed road design and parking changes, trail users would have to deal with daily traffic up and down Transfer Trail by mine equipment and workers, Peterson said. And while passing by the active mine, they’d experience noise and dust from mining operations.

“Transfer Trail above the saddle parking lot would become a graded and plowed road with daily mining traffic. It’s unclear how we would drive snow machines on that section, and the fun and challenge of mountain biking that section will be lost forever,” said Michael Gamba, a former Glenwood Springs mayor and GSCA board member.

“The mine expansion poses potentially serious environmental and economic threats to Glenwood Springs. With these signs, we wanted to help trail users understand how the mine would impact their use and enjoyment of Transfer Trail,” Gamba added.

The informational sign is located on Glenwood Springs right-of-way, and was approved by the Glenwood Springs City Council in December. Graphic artist Alice Sjoberg designed the map, and welder Sandy Lowell built the sign frame.

See the map and explanation of Transfer Trail impacts here.